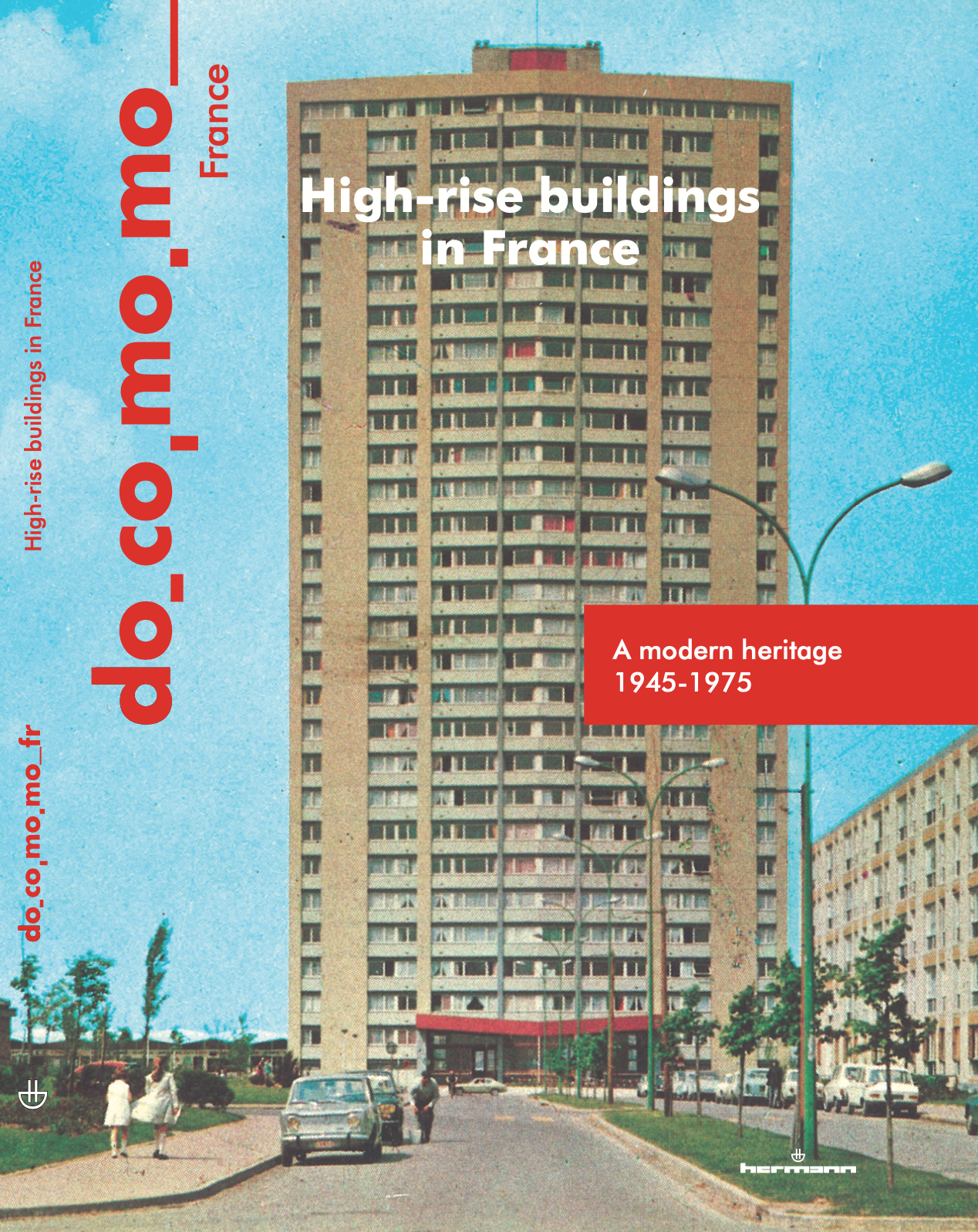 This special issue of the Bulletin Docomomo France is edited and distributed by Éditions Hermann.

You can find or order this special issue at any bookstore.

The cover of this new issue of the Bulletin Docomomo France features the tower block that dominates the Oliveaux housing estate in Loos, in the Lille area. At the time of its inauguration on May 28, 1970, this tower block was the highest north of Paris at 84 metres tall, over 28 floors. Even today it is the tallest high-rise residential building in the north of France. The Kennedy Tower was planned in the early 1960s as part of a project involving nearly 2,500 housing units and was symbolic of the last years of growth and expansion of the Lille suburbs, and more simply, of the success of the construction of the Oliveaux neighbourhood, of which it is the main emblem. Its designer, the architect Jean-Pierre Secq wanted to break with the monotony by changing the contours of the urban landscape of Loos with the monumental Kennedy Tower, which is the completion point of the wider urban perspective of the estate. To be found next to it are a shopping centre and a car park, and further on, the gymnasium, a football pitch, and ultimately the fields.

Slim and relatively elegant, the tower block does not sit within a simple rectangle. Its profile, as well as the slight curve of its façade, is a very distant reminder of the Pirelli Tower in Milan (1956-1960, Gio Ponti, architect, and Pier Luigi Nervi, engineer) or Sivill House in London (1962-1966, Douglas Bailey, Francis Skinner and Berthold Lubetkin, architects). The allusions to the waistline and the femininity of the tower block, which was for a time called Miss X, were superseded in its final name by the still vivid memory of President John Fitzgerald Kennedy, who was assassinated on 22 November 1963 in Dallas in the United States.

Despite renovation work between 1993 and 1995, it has recently been decided that the Kennedy Tower is to be demolished as part of the redesign of the Loos Les Oliveaux neighbourhood. Faced with the determination of a group of occupants who wish to remain in the building, Ms Anne Voituriez, Mayor of Loos declared on the local television station Grand Lille TV on December 24th 2018:

The five buildings that are to be demolished are buildings that have been identified as being in poor condition and cannot be rehabilitated. They are in such a bad state that they are definitively to be condemned in the short or medium term. Further more, the Kennedy Tower will find itself at the intersection of Avenue de la Paix and Avenue Vincent Oriol. This crossroads will be redesigned. The road network in the neighbourhood will be redrawn to allow better access to the district and to enable the construction of a green corridor for the main infrastructure and shops of the city. In relation to this corridor, in relation to this crossroads that will form the heart of the neighbourhood, the Kennedy Tower is really in the wrong place.

Then, broaching the subject of the cockroach infestation in the tower block, the Mayor continued:

Despite all of Partenord's efforts, it is difficult to control this phenomenon because cockroaches reproduce very easily. There are of course other reasons to demolish the tower block, because a cockroach infestation is not a sufficient reason. This tower block was built with materials dating back to the 1960s, these materials are no longer in use today. It is a tower block that is also inaccessible because the lifts stop at the half floors and therefore for the elderly people who live in the tower block, who have been there since the start, for example, and who have grown older, access to the tower block and their apartments is difficult, as it is for families with young children and people with disabilities.[1]

In the outline of this story and in the words of the local councillor, it is possible to grasp all the stigma that the high-rise buildings of this generation must bear: the trans-Atlantic references to the American skyscraper, the erectile symbolism and monumentality of collective housing in the years of economic growth, the comfort, the view and habitability appreciated by the occupants, the negative reception of elected officials and managers armed with normative and sometimes strange considerations. In this case, the cockroach-infested tower block has obviously moved to the wrong place, right in the middle of the crossroads. The Kennedy Tower therefore, as a result of a redevelopment project and a new road design, has gone from being a monument of the city to total relegation. The caricatural element of this example is also emblematic of a French situation that has seen this reversal take place over the last forty years or so regarding all the major housing estates and their architecture.

The reader, a contemporary observer of the strong resurgence of the urban tower block, will certainly find critical material of choice in the case studies developed in this new special Bulletin Docomomo France. The genesis, the influence of the models, the singularities, the reception and the future, quite simply the history of these objects that are scattered around the country like so many village church steeples, concentrating both the hopes and the uncertainties of modernity. The stories of known and less-er-known tower blocks recounted in this Bulletin shed light on the relationships between the context, local circumstances, and the material and cultural situations of high-rise buildings. The tower block as both an economic and symbolic instrument of urban development is rapidly becoming the target for a form of critical violence. The weakness of the arguments thus reveals the ideological character of the debates and probably explains, more than the other reasons put forward, the destruction and customiza-tion of all kinds, the most common ingredients of which are revegetation and artificial lighting. Even though the integrity of the residential belfry of the Perret Tower in Amiens could not be preserved, in-teresting discoveries are still possible among the precision and rigour of the European Tower in Thion-ville, the sculptural plasticity of the tower blocks of Grenoble, the sculptural singularity of that of La Duchère or the restrained purism of the Viollet Tower in Angers. Other aspects open up scope for reflec-tion: the tower blocks of a region, those of a city, the face of an administrative programme that chooses the archetype of the tower block and its base to represent of its social dimension, the figure of the high-rise architect, that of the architect of series, typological manipulations and morphological inventions.

High-rise buildings clearly need consideration. Perhaps they can still pass on some of the techniques, atmosphere and aesthetics of the second half of the twentieth century to future generations. This part of the legacy of the Modern Movement also ensures the coherence of the urban ensembles to which they confer the dignity of elevation.

15 | The reception of high-rise buildings in Paris in the 1970s. The Maine-Montparnasse Tower: towards heritage recognition? | Riccardo Forte and Milena Crespo

64 | From tower to tower. The legacy of urban modernization in Alsace (1954-1973) | Gauthier Bolle and Amandine Diener

78 | A Brutalist defence in an age of lightweight facades. The panoramic tower block of La Duchère in Lyon | Philippe Dufieux

122 | A lifetime of innovations. The glory and obsolescence of the EDF Administrative and Technical Centre in Issy-les-Moulineaux (1960-2010) | Catherine Blain

140 | The Viollet Tower block in Angers. A manifesto of “inner purism” | Silvia Berselli

158 | The renovation of tower blocks in housing estates, from unity to disparity. The case of the Mazades Tower block (1958-2020) | Audrey Courbebaisse

200 | The tower blocks of Île Verte in Grenoble. A legacy of kinetic sculpture buildings | Bénédicte Chaljub

Digital edition: after exhaustion of the distribution of the printed edition