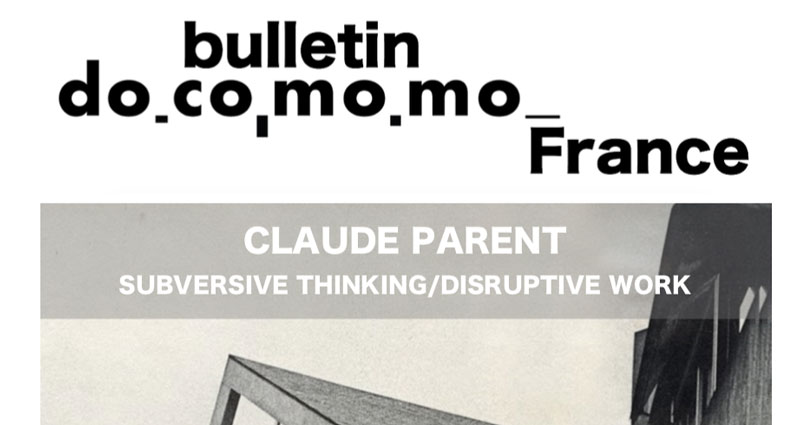 This special issue of the Bulletin Docomomo France is available:
- in a freely accessible digital edition below,
- in printed edition distributed on Amazon: online order

Claude Parent had everything going for him. From his collaboration with the Espace group in 1951, when he was able to make the best of mixing with Félix Del Marle, one of the rare French neo-plastic artists, and André Bloc, the founder of the magazine L’Architecture d’Aujourd’hui, until his induction into the Académie des beaux-artsduring the year of 2005, Claude Parent was an architecture activist and often present when and where it mattered. A creator of exceptional houses as well as major institutional commissions, cultivating the figure of the artist-architect  – beautiful cars and spectacular outfits in the 1970's – attracting the faithful who now establish a form of filiation, a rebel, unqualified but recognised and then celebrated by the profession and the institutions, Claude Parent was a talented designer, a generous and welcoming character.

He was the inventor of the fonction oblique, a positive theory developed just when waning modernism met the liberation of the body, and was worshipped by a few zealots for twenty or so years and was the subject of an exhibition at the Cité de l’architecture et du patrimoine(Architecture and Heritage Centre) in 2010. One might imagine that the material future of his works is assured. The future of the architecture of Claude Parent, who died on 27th February 2016 at the age of 93, is however marked by contrasting situations. In spite of the recognition of his work and the celebration of the architect, the material conditions of the transmission of part of his heritage remain rather uncertain.

The contributions of Milena Crespo, Riccardo Forte, Audrey Jeanroy, Alice Weil, Gilles Beguin and André Macchini shed light on both the historical aspects and the material future of the projects, as well as the questions raised by the legacy of this remarkable figure. The positive and attentive taking into consideration of the material safeguarding goes side-by-side with buildings in difficult situations which will most likely owe their preservation to the tenacity and vigilance of a handful of campaigners.

Docomomo France is devoting this latest issue of the Bulletinto the paradoxical figure of this architect whose work, though recognised, is nevertheless partly threatened just as is the case with very many examples of the heritage of the architecture of the 20th century and whose material future is still uncertain. It is thanks to the generosity of Naad Parent that we are able to illustrate these contributions and this very special issue of the Bulletin Docomomo France. Claude Parent's generosity had enabled the new edition in 2004 of the publication initially printed in 1970, Vivre à oblique [1] and the publication of the book[2] about the Sainte-Bernadette du Banlay Church in Nevers. In the introduction to this work Claude Parent believed that the Nevers church had just won its war[3] and that it had provisionally won the battle of current destruction. It would seem that this battle is not yet won for much of the architecture of the 20th century.

[3]The Nevers church was listed on 13th January 2000 then, on the 25th May of the same year, it was classified as a Historical Monument.