Petition: Against the erasure of Tony Garnier’s work

At the very moment when Lyons is celebrating the 150th anniversary of the birth of one of the most famous architects of the early 20th century, Tony Garnier (1869-1948), neither any recognition of his innovatory ideas about town planning nor the protection of his architectural works are to a level that they ought to be.  Garnier's heritage remains in an extremely fragile state, despite feeble measures having been taken towards their legal recognition as Historic Monuments - measures which have proved insufficient to be effective.  Over the course of the last decades several of his buildings have suffered abuse, irreparable changes or even demolition, as has recently been the case at the Edouard Herriot hospital.

The future of his stadium at Gerland is hardly any better assured, due to its sale to a private sector investor, even if its status as a historic monument is supposed to protect it against excessively brutal alterations, given those it has already suffered during the 1980s and 1990s.

As for the Etats-Unis housing estate, although it has gained both the designation of Patrimoine du XXe siècle (20th century heritage) and support from its residents, its long-term protection is not guaranteed, given its context within Lyons' 8th arrondissement, as that is undergoing dramatic urban renewal.  And other buildings, such as the ex-Vacherie in the Tête d'Or park - have been suffering a long while.

It is now a matter of urgency to reflect on this situation and to act in a coherent way, at the level of the greater Lyons metropolis supported by steps to which the City of Lyon has committed, by rapidly launching a report on the entire corpus, in order to bring about the most effective measures for protecting Garnier's work (for example, by extending the zone of Lyons covered by UNESCO's World Heritage designation, by reinforcing the level of protection accorded by the Monuments Historiques, by the creation of one or more protected zones ...).

We cannot just stand by and watch, not reacting to the deterioration and obliteration of a corpus that each is going to acknowledge, from October onwards, as one of the principal contributions to modern architecture and town planning.  So it is time to act!  Political commitment is an essential condition for any progress of this situation.  We, the signatories to this petition, commit, whenever we can, to challenge the heads of the electoral lists at the next city and metropolitan elections, so as to find out their intentions concerning the protection of Garnier's works in Lyons.  Each elector can then draw the conclusions that they imply.  Let's rally to the cause!

If you agree with this petition, please:

Send this call in your professional network !

Thank you for your support 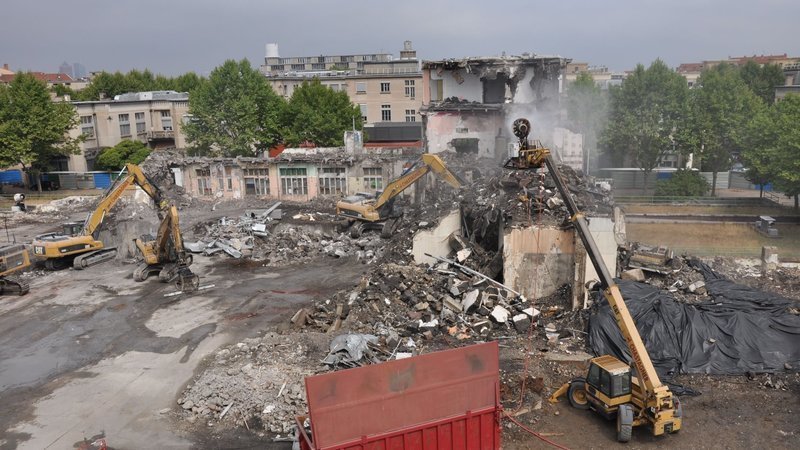 © Demolition of one of the pavilions of the Edouard Herriot Hospital in Lyon on October 24, 2016 (architect: Tony Garnier).
(c) A-S. Clémençon